"Back when most art aficionados were still scratching their heads over the whole concept of the internet, a skateboard fanatic named John Trippe moved to San Francisco and taught himself to code. Fecal Face, Trippe's 12-year-old website, is now an internationally renowned art forum that gets about 13,000 visitors a day."
- San Francisco Magazine 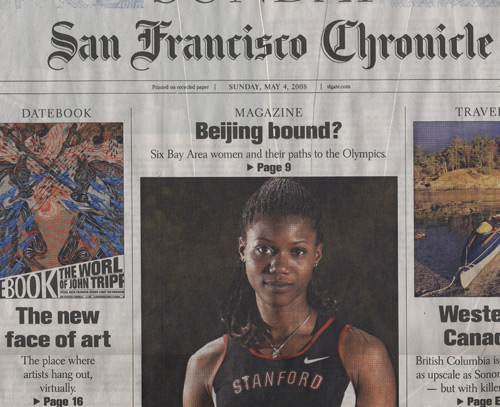 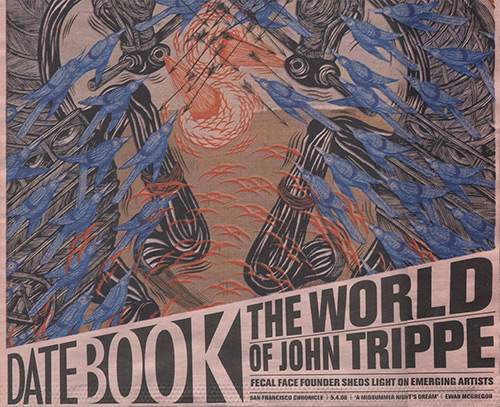 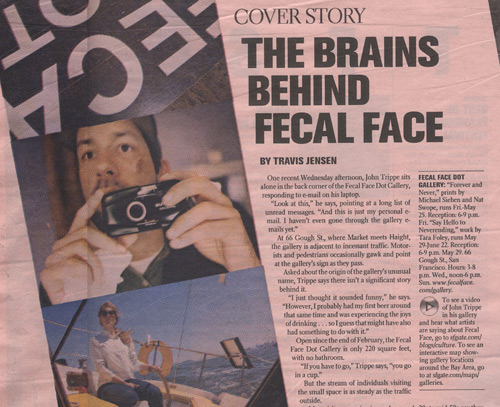 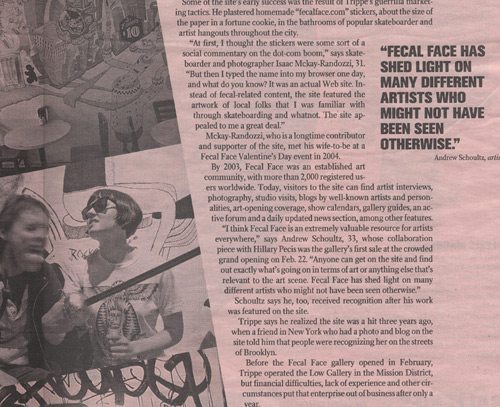 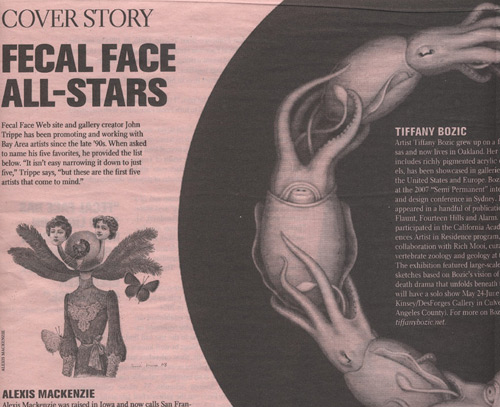 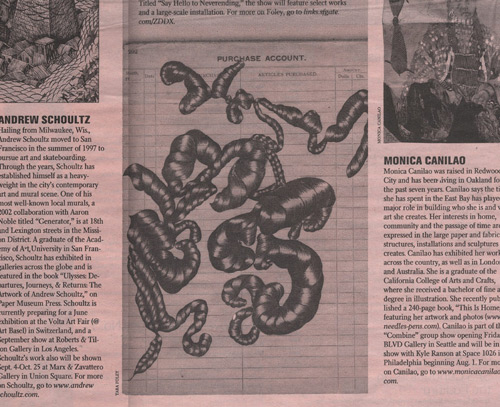 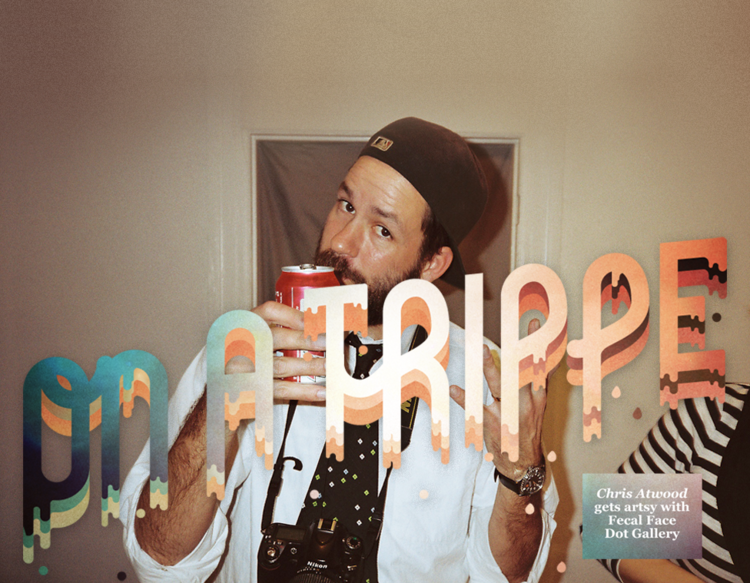 "Mission Street from 16th to 24th is a unique stretch of the city. The streets are too rough to skateboard on, the 14 rushes by every few minutes, and the storefronts are a jumble of the historical and the new. Among the taquerias and discount stores, John and Jessica Trippe recently opened the latest location of their FFDG. It's something of a link between the old and contemporary versions of the neighborhood, a voice for the next generation of artists and thinkers based on old-school ideals of hard work. On a block not exactly known for contemporary art galleries, they have planted their flag."
- The Bold Italic 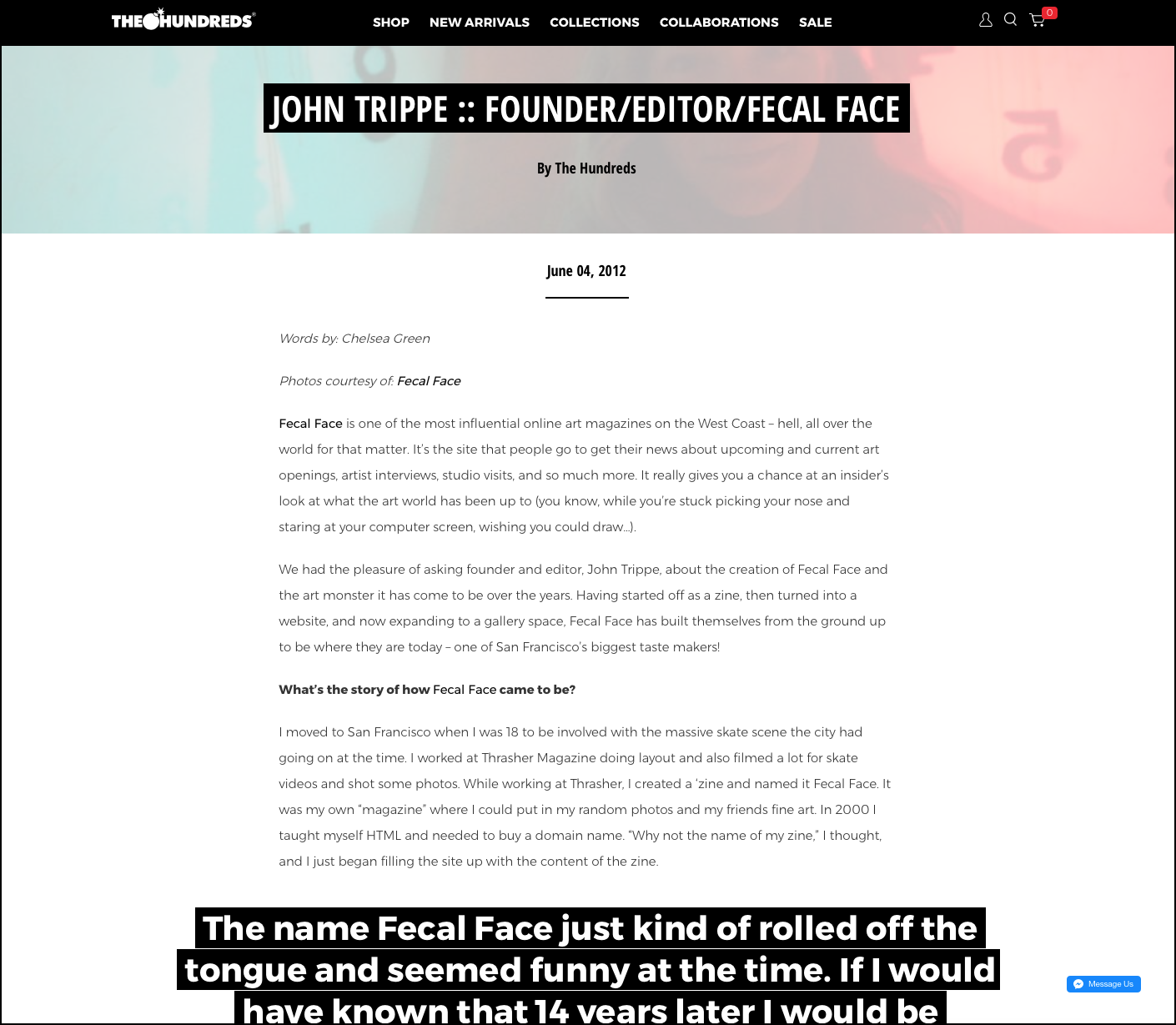 "Fecal Face is one of the most influential online art magazines on the West Coast – hell, all over the world for that matter. It's the site that people go to get their news about upcoming and current art openings, artist interviews, studio visits, and so much more. It really gives you a chance at an insider's look at what the art world has been up to (you know, while you're stuck picking your nose and staring at your computer screen, wishing you could draw...)."
- The Hundreds 6/4/12

"Never mind the mezcal, there's more than a bit of mescaline about the psychedelically tinged work of San Francisco painter Sylvia Ji, which in her latest collection Interwoven continues previous meditations on the Mexican culture's compelling obsession with beauty and death through studies of women and textiles."
- We Heart 7/18/13

"The title of Jay Howell's new solo show, Enthusiastic Person, couldn't be more apt; as an arty type of guy he's got it damn near perfect. Dividing his time between art directing, illustrating for major companies, designing characters for hit (dare we say cult) animation series like Bob's Burgers, and general West Coast of America style skater dude loafing with girlfriend and dog; Howell seems to be living the dream, or at least his version of it."
- We Heart 2/15/13

"Last week, FFDG hosted the opening of Jay Howell's solo show Enthusiastic Person. On Howell's resume is the character designer of Bob's Burgers and co-creator & art director of the upcoming show, Sanjay and Craig. His latest show consists of mixed media on paper and sculptures featuring the cast of characters familiar to his work."
- Arrested Motion 2/10/13

"The history of Modern art is characterized by a series of movements that rewrote the established rulebook of what art should be that had been in place for centuries. Those movements needed to happen. That book needed to be rewritten. Unfortunately, part of this transition involved diminishing the importance of the real craft of painting, painterly skill and the celebration thereof.

Shawn Barber re-embraces that true craft; the craft of Velasquez and of Van Dyke, two masters that he lists as influences. His work goes back to the roots of what makes great art. It champions hard work, dedication and tradition. He even has the words 'Work' and ‘Hard' tattooed on his fingers."
- SF Art Blog 7/14/11

My Love For You | Interview w/ Corey Arnold

"Interview with photographer Corey Arnold about his photography, fishing in Alaska and his solo show FISH-WORK @FFDG."
- myloveforyou 2/22/11

"The Future Colors of America, the trifecta consisting of Albert Reyes (who now lives in LA), Matt Furie, and Aiyana Udesen, have created their own illustrative voice, a worldview who's origins are seemingly found uniquely in San Francisco (Jay Howell, Ferris Plock, and Porous Walker spring to mind as well), that is expressed with a DIY sensibility, illustrative aesthetic, and fuck-all attitude who's charmingly hilarious pop commentary is indicative of something we don't feel comfortable defining, but goddammit, we like it."
- Hi-Fructose 7/19/10

"The artist's line work is simple but incredibly expressive. A shoe or a hairdo are represented as one blob of color but are still distinct and familiar."
- KQED 11/18/09

In September 2009 GALLERY CRAWL headed to Fecal Face Dot Gallery to interview Mel Kadel and have a look at her new exhibition, ECHO TEST. Kadel incorporates vintage patterns, yellowed paper, and a persevering heroine into many of her works.
- KQED 10/22/09

"Although his paintings express a self-assuredness and skill level beyond his years, Gunderson's youth shows in explanations that are sometimes vague, perhaps still forming."
- SF Examiner 7/23/09

"Materializing space into a simple geometry, Damon Soule works in the fissure between pop surrealism, neo cubism and fractalism."
- ArtSlant 5/26/09

SF Magazine | The Young and Hungry Have Arrived

"A young gallerist with international ambitions, the story goes, is doomed in San Francisco. The artists don't struggle. The collectors are in hiding. The counterculture associations won't die. But that was then. Now, the risk takers are here."
- San Francisco Magazine 4/10/09

"Fish has created album covers, signature shoe designs, skateboard decks and even beaver-shaped vibrators, but has never used a two and three dimension combination in this fashion."
- X Press 2/24/09

"I applaud Urich's nimble gouache application here, the monochromatic touches so subtle and fused to the page they appear like ghostly photo transfers."
- Art Slant 1/13/09

"This is memento mori with hope - that you might be memorialized so tenderly."
- SF Weekly 1/7/09

"We own two of her works and they are just stunning in person, highly suggest checking her work out if you are able."
- Sour Harvest 10/24/08

"Satva Leung visits the founder and curator of Fecal Face and gets the inside scoop."
- VIMBY 10/15/2008

"These artists, their westward expansion notwithstanding, are definitely on the way to somewhere promising."
- Flavorpill 10/4/08

"This show leaves you with quite a bit to think about and a sense of the inexplicable. Are we somehow stuck building a stairway to nowhere, our rifles all the while trained on the last vestiges of our natural world?"
- Art Slant 6/16/08

"It's this imaginative hyperesthesia that makes Foley's work so heart-rending, and so exquisite."
- SF Weekly 6/11/08

"With Fecal Face Dot Gallery on the case, the art scene is likely to get much more interesting, and the parties much more fun."
- SF Weekly 5/28/08

"Today, with the Web site's continuing popularity and the positive buzz surrounding the gallery's first two shows, Fecal Face's future as a Web site and as a gallery looks much brighter."
- San Francisco Chronicle 5/4/08

"Scoff at the name all you want, Fecal Face Dot Gallery is the newest local spot for art that appeals to snot-nosed kids and grown-up art snobs alike. It's got a gross name, but it can be a family place."
- KQED Radio 5/25/08

"These drawings are meant to be crude and rough, which is how these people look or act in real life."
- SF Bay Guardian 4/24/08